What You Need to Know About Tendonitis PART I- What causes it?

What You Need to Know About Tendonitis

What You Need to Know About Tendonitis

Tendonitis is a term we frequently hear thrown around to describe a sudden onset of pain associated with normal daily movements.  Since losing my headphones, I have recently learned that many of the other gym going patrons are experiencing tendon related injuries.  You might say it’s a hot topic. What causes tendonitis? How can we fix it if we develop tendonitis? And better yet, how can we help prevent it from happening in the first place?

First of all, what causes tendonitis?

Well before we get to that, let me tell you a story. Once upon a time, there was a city named Tendonia. It was a super cool city, and all the surrounding cities wanted to conquer it and claim it as their own. Thankfully, Tendonia was surrounded by a well fortified brick wall that protected from its enemies. Every day, though, enemy armies would come and attempt to break down the wall. The armies would hammer away at the wall all day causing it to become damaged.

To counter the efforts of these armies the city employed a loyal hoard of masons who, not only can build the wall, but also make the bricks. Since the enemy armies will kill the city masons if they come out during the day, they are only able to effectively build the wall during the night while the enemies are sleeping or times when they were resting.

During the day, though, the masons need to gather materials to build bricks, so that as soon as night falls they are ready to start rebuilding. As soon as the armies go to sleep, the masons get right to work slapping down bricks as fast as they can. As long as the masons can keep up with the destruction then the wall is rebuilt and the city is safe. However, at times, the enemy armies bring in extra forces. Other days they work longer hours, repeatedly pounding away day after day. When this happens, the masons can no longer keep up. They don’t have enough time to offset the effects of the attacking armies. Since they aren’t given sufficient time to rebuild, the wall becomes damaged and can no longer function the way it is supposed to function.

So, what does that story have to do with tendonitis?

Well, much like this brick wall, a tendon serves a very important purpose in the human body. It connects the muscles to the bone through strong fibers that are designed to withstand a lot of force. When the muscle contracts it pulls along the tendon and allows the body to move along the joint. The tendon is made primarily of collagen fibers and is remarkably strong. It actually has one of the highest tensile strengths found in soft tissue. This is primarily due to the structure, orientation and tissue composition of the fibers.

These fibers that make up the tendon in such a well fortified manner are like the bricks in the city wall. During the day when we are walking, performing our job duties, playing sports, and moving we place stress on the tendon. 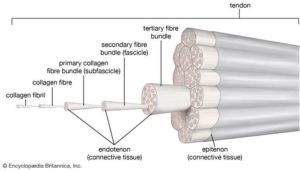 Throughout the day, the tendon goes through a process of breaking down when we use it, and then building back up when we rest and when we sleep at night. When the tissues of the tendon are under too much stress, such as when we just start a new exercise program that the tendon isn’t used to, it is like when the extra armies arrive and work harder than normal at the wall. When we are not getting enough sleep or taking periods of rest throughout the day, it is like when the armies are working longer hours and not giving the masons a chance to work. Finally, if we have poor nutrition and hydration it is like not having the supplies needed to build the bricks. Although this is obviously oversimplified, when we think of it this way, we can easily see how these factors would lead to a slow degradation of the tendon over time. Eventually, when we stress the tendon more than its ability to recover, much like when the army damages more bricks than the masons can rebuild, this is when tendonitis-like symptoms occur.

So, now that we understand what causes tendonitis, how can we fix it? We’ll discuss that in our next blog post in Part II of our tendonitis series.